A year after New York City was shut down, COVID-19 has claimed the lives of more than 30,000 of its residents. The scale of the tragedy made it difficult to understand the private sorrows many of us have experienced: the millions of sorrows of lost friends, lost livelihoods, lost neighborhood accessories, a sense of belonging. lost. Instead of offering a large permanent memorial, we asked a wide range of New Yorkers about the moments of the pandemic that marked them and how they would like those experiences to be remembered. In response, a selection of architects and artists translated these memories into proposals for temporary installations. We imposed no budget limits and no restrictions: the result could be a sculpture, a mural, a pavilion, a song – anything that could be part of the streetscape for a while. Featured here is one of 15 concepts submitted by architects, designers, artists and composers; the rest will appear during this week.

Infinite Clovie: When the pandemic started, we walked away completely. To be honest with you, it was an adjustment, especially with school, because at first I just lacked motivation because I was confused about what was going on and there was a lot of anxiety. And then it was a bit of laziness having to take responsibility for the work. But after about a month or two, I was able to make this adjustment. What initially motivated me was seeing that I have two little sisters looking at me and I know it’s just something I had to do. After that, there were times when you just didn’t feel like getting up and doing things, but the teachers were very helpful.

Do you see friends at school? Oh, I miss that. I really do. Because online no one has their camera on – it’s just a bunch of black squares. It was also my last year. I only really speak to two of my friends from school. Everyone collapsed either, and what I mean by collapsed is that they’re totally by default, they don’t do any work. As well as what’s going on with the pandemic, I could see it building up on them. Many of them are just starting to leave life.

So me and a few of my classmates have a club at school called Never Forget My Brothers. The Never Forget My Brothers Club is something that I created, a space for young men in school and in the community, so that they can come and have a place where we can step into positive things and have people who support you. We used to have weekly meetings when everything was going, with the protests and things like that, just so people could see what everyone was feeling. In fact, in May and June when a lot of protests started, we had our meetings and it was online, but a lot of people came.

Summer was a very revealing time. I had just started to appreciate the little things more because a lot of people died and a lot of people were losing their jobs. I lost two of my aunts [to COVID]. It was Brooklyn’s worst zip code next to Brookdale Hospital.

Infinite Clovie had nowhere to go during the pandemic. Attending high school from a distance and losing his two part-time jobs, he went from being busy (and out of the house) from morning until midnight to having time to take a break and think. While some of his friends “fell apart,” Clovie kept his club after school for young men going, built a bedroom and sound studio in his grandmother’s apartment, and started a line. fashion. Recently, he and his after-school club also met with local officials to ask for cheap internet access.

East New York, where he lives, has been one of the hardest hit by the Brooklyn pandemic. And so the image that comes to mind when he thinks of the past twelve months is “a community under the sun”. He adds: “What the pandemic has shown us is that we don’t really need to be raisins in the sun.” Instead, he says, “We can be replenished in the sun.” And where would it take place? “I want this to be a place where everyone can see it… maybe above a building.”

BRANDT: HAFERD, a Harlem-based design firm named after directors Jerome Haferd and K. Brandt Knapp, designed what they call a “rooflet” for Clovie. It’s the next iteration of a “park” they designed for local restaurants in Harlem’s Renaissance Pavilion to provide alfresco dining. This street project, in collaboration with artist Thomas Heath, was inspired by the idea of ​​migration and movement, with images that migrated across the surface of the structure. The designers see the rooflet for Clovie as the next step in a practice that began with their first built project, a 2012 madness for a competition organized by the Architectural League and the Socrates Sculpture Park.

“His story spoke to us and told us about our own experience as a small and sometimes precarious design office,” says Haferd. “Part of the genealogy is also kind of a resourcefulness – building, tweaking, remixing on an idea.” Clovie’s desire to fight isolation, stay motivated, and draw strength from the sun prompted designers to imagine a structure that could support its dynamics and projects. “We just allowed ourselves the imaginative space of pretending that five years from now, this very enterprising teenager has a fashion line,” Brandt says. “And maybe what started his success was that in the COVID days he needed to have pop-ups, but instead of them being indoors, they are roofs.

The design team also saw cultural ties between Harlem, where they are based, and the Clovie neighborhood in East New York. “In a way, we started to collide our two stories and mix them up,” Haferd says. He also notes that Clovie’s quote on raisins in the sun comes from the poem “Harlem”, by Langston Hughes, which begins with the haunting and now familiar question: “What happens to a delayed dream?” “There is a connection between these black liberation spaces and our collective liberation during COVID,” he says.

The roof structure appears to be woven together, in part motivated by their exploration of quilting. Designers see their approach not only as theoretical, but also rooted in their interest in craftsmanship and the process of making things by hand. “We felt,” Haferd adds, “like [Clovie] co-produced that with us. 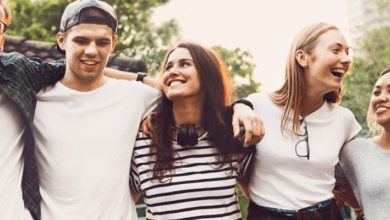 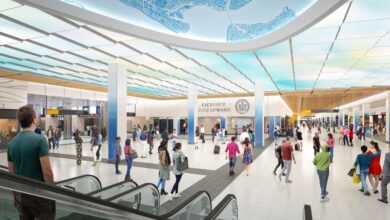 Could We Really Get a Good Penn Station? 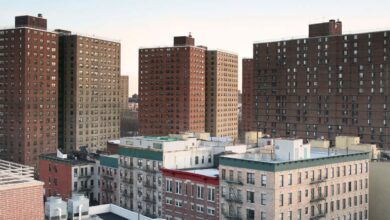