A huge vintage ‘Ask Alexander’ poster from the early 20th century takes pride of place on the wall above the dining table. “Alexander was a famous conjurer/magician/seer/vaudevillian,” says Pam Sommers. “It was my late husband’s and I love having it as a focal point in the room.”
Photo: Claire Esparros

Speaking of the blues and how I ended up with an all-blue apartment,” says Pam Sommers from her 550-square-foot Village studio, “basically, my apartment was born out of a two-inch piece of stone.

It all started with an intention to replace kitchen counters; she stumbled across Jac Elan tile store, where she found the “Cambria Quartz line which had really cool colors. Then I spotted this navy square with tiny blue pops, which gave it depth and life. And that gave him other ideas. “I changed almost everything inside this apartment, except the floor and the windows,” she says with a smile. “I had a trip, 100%.”

But to back it up: Two years ago, after selling the 2,000-square-foot loft where she and her late husband had lived for 26 years, Sommers decided to downsize. What she didn’t think she wanted: a 1960s post-war building or a one-room studio. Then she walked into this place and found it was exactly what she wanted. “The lobby was Mad Men, mid-century chic, the layout was very reminiscent of my loft, and it had this view (facing south), which overlooked the iconic rooftops of the village, so nothing will ever obstruct it – or at least my living. It didn’t hurt that there was a large closet where she could also fit a washer/dryer.

She then began what she describes as her “joyful adventure” of methodically purging, donating and selling a lifetime of loft: white Wedgwood, copper pots, sets of linens, pottery and – given her work as advertising director of Rizzoli – less than 3,000 pounds. (She still has about 1,000, though.) She created an Instagram account that she dubbed “Pam Sells the Ranch” and ran it like a virtual garage sale. As for her library, “I literally did this Marie Kondo thing of taking each book and thinking, ‘Do I like this? Do I need this? »

Sommers studied art and illustration at Parsons; ran Cherchez Antiques and Potpourri, where she learned about furniture and how to buy at auction; stylized photo shoots; and started the Illustration Gallery on East 11th Street (where she represented Roz Chast for a time). After closing the gallery, she went to work for Taschen Books, then Rizzoli, where she remained for two decades.

“The biggest decision,” Sommers says, “was whether I brought furniture I owned, like a large Empire-style chest of drawers and a primitive country crockery cabinet painted green.” She ditched the heavier pieces, opting for sleeker built-in bookcases and a bench seat for the dining/work area.

The rigorously edited decor includes a mini-version of the Moroso Big Mama sofa she had in her old loft, a mid-century-looking Ikea stool now lacquered in a shade of blue, a large dose of Stratford Blue by Benjamin Moore on the walls and Blue Heron on the cabinets, a bed from West Elm with four giant drawers underneath and an Ikea light fixture for the bed area that Sommers had loved for years, now out of stock but found on eBay. His passion for bistro chairs is also satisfied.

“Living in a smaller space was such a pleasure. There was no adjustment period,” Sommers says. shards of Sommers’ glass, collected during his forays through the mud along the banks of the Thames, lie in bowls on a table at the foot of his bed.

His kitchen renovation, which was originally meant to replace countertops, got the ball rolling on a gut renovation. “I absolutely didn’t want any materials in the kitchen or in the cupboards.”

The bedroom niche is tucked along the wall of south-facing windows, next to the living room. It can be closed with a band of Carolina Herrera navy blue silk taffeta, found at mood fabric.

“The first thing I bought was a couch,” Sommers says of his studio version of the Moroso Big Mama couch she had in the attic. “It’s built like a tank, and it’s super comfortable.” The bistro chairs are Savieh.

The navy blue and white striped duvet cover was made from a fitted sheet of the company store. “I’ve loved this Ikea staple for years,” Sommers says of the light fixture above the bed. “It folds flat and each layer of paper has metal edges so you can hand mold it into your own unique shape. It makes me happy every day.

Given 27 years of books and decades of collecting photographs, Mercury glass and more, decisions had to be made about what made the cut. Here, a detail of some of the photographs and books that have passed the milestone.

On the wall, clockwise from top left: conical hat with fleur-de-lis by Masatomo Kuriya; childhood portrait of Sommers’ late mother; a chrysanthemum by Doris Mitsch; portrait of the dancer Tanaquil Le Clercq by Tony Vaccaro.

The “bar” by the front door is a 19th century hand painted cooler found in a beautiful, now long gone antique shop on Bleecker Street. “The lid lifts off and the door opens and it’s lined with pewter,” says Sommers. “We have collected decanters here and in England.” Sommers was inspired to collect advertising rulers after seeing the one that Pentagram graphic designer Susan Hochbaum had. The bathroom’s red, black, and white scheme recreated that of her old loft’s bathroom.

Small Bathroom Ideas to Spruce Up Your Home 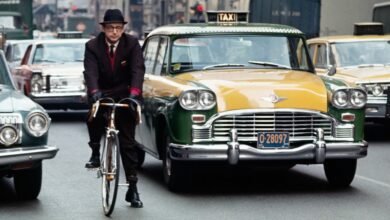 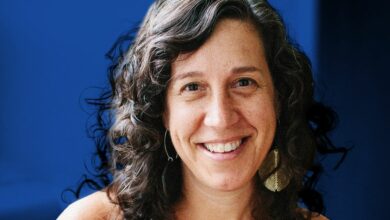 There Are No Good Listings 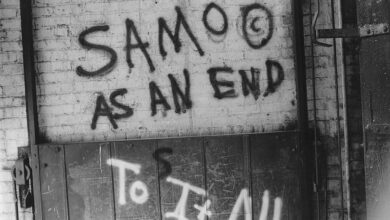